Laparoscopic surgery (including robotic surgery) is a type of keyhole surgery, and would be considered the ‘Gold Standard’ in most kidney surgery in today’s modern world for the majority of operations on the kidney.

This means that when having kidney surgery – be it removal of the whole kidney the medical term for this is nephrectomy or part of the kidney (the medical word for this is partial nephrectomy), one of the first things that you should consider is if this can be performed by keyhole surgery. Now sometimes keyhole isn’t always the best thing for you – an open operation may be – and this is determined by factors like the size of the kidney tumour, if you have had previous abdominal surgery, or in a very complex situation. However, the overwhelming majority of kidney tumours can be performed by keyhole surgery nowadays.

What are the benefits of key hole surgery (laparoscopic/robotic)?

There are many many advantages to keyhole surgery  over open surgery. These include less pain, quicker recovery, smaller scars (which often can be hidden from view e.g. in the belly button, or below the belt line), often less bleeding, and less complications ( less chest infections, less wound infections, less deep vein thrombosis).
This has major ramifications for you the patient. With a quicker recovery, it means you can get back to work and the things you enjoy doing a lot more quickly. In my experience, people just want to resume life as normal when they are told they have cancer, and by having an operation that allows them recover quickly then they can do this. 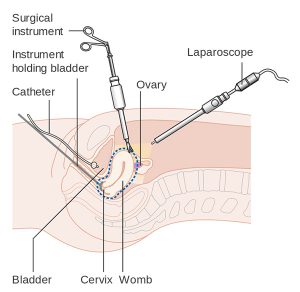 This is where a kidney cancer lump is removed from the kidney by keyhole surgery, and at the same time preserving most of the kidney. The analogy would be having a breast lump removed rather than the whole breast for breast cancer. This is now the main operation performed in kidney cancer in modern cancer centres. Up until a few years ago, if you had kidney cancer the whole kidney was removed. But now we know that just removing the lump is equally as effective in controlling the cancer. The benefits of this are that the kidney is preserved, therefore you have less risk of running into trouble with kidney failure, and we think there is probably a benefit in survival by doing it this. Also, about 5% of patients who have kidney cancer will develop another kidney cancer during their lifetime, and by preserving the kidney in surgery like this it keeps options open if that were ever to occur.
Extremely complex operations on kidney cancer can now be performed by either laparoscopic or robotic surgery, and the patients will experience all of the benefits and advantages of having keyhole surgery. Most kidney cancers now are detected at a small size, which means that most operations on the kidney for kidney cancer can be performed by minimally invasive surgery.

This operation is where a blockage of the kidney is removed, at the junction of the kidney and ureter (tube that comes out of the kidney and drains the urine). The condition is called UPJ obstruction. This is an operation that is practically never performed by open surgery nowadays. It is highly successful by keyhole surgery, and the recovery is often very quick with all of the benefits explained above.

I perform this operation completely by keyhole surgery, in which both components of the operation are performed through keyhole incisions. This has the advantages of being the similar to an operation where only the kidney is removed (rather than incisions of a double operation) as it has all of the same incisions. This operations can be performed equally as well by robotic or laparoscopic surgery  and carries with it all of the advantages of keyhole surgery.

How many incisions do I have? What do they look like and where are they located?

The first thing to mention here is that the incision for keyhole surgery (laparoscopic or robotic) only measures about 1cm, often less. These types of small wounds tend to heal extremely well, and often become invisible. The amount of these incisions can vary from 3 to 6 depending on the complexity of the operation. Their location also varies a lot – they can be in the centre of the abdomen, the side or hidden in locations like the belly button, or below the bikini/underwear line.

Keyhole surgery (laparoscopic/robotic) equals open surgery in terms of cancer control, but has many advantages to the patient, which mainly include quicker recovery and less complications of surgery.